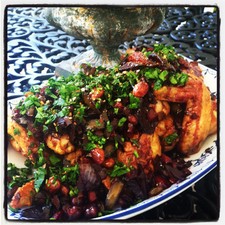 Place in a sauce pan and bring to a boil.  Reduce to one cup of liquid.  Remove cloves and cinnamon stick.  Set Aside

Whole Chicken, cut into 8 pieces or purchased as 8 pieces

Season the chicken with salt and pepper.  Heat a large skillet on high heat until very hot.  Add ¼ cup of olive oil and carefully place the chicken in the pan with out over crowding.  If all the chicken does not fit then brown in 2 batches.  Cook the chicken on both sides until they are golden brown.  It should take 5-7 minutes per side.  Place the browned chicken in a baking dish and place in a 475 degree oven for 20 minutes or internal temperature of 160 degrees.

Step Three:(While the chicken is cooking)

Sauté the carrot, celery and onion in the 2 tablespoons of olive oil until they begin to brown slightly.  Add in a ½ of cup of  the wine reduction and bring it to a boil.  Add in the raisins, almonds, chick peas vinegar, sugar & vinegar mixture, and remaining wine reduction.  Bring to a boil and then reduce the liquid by half or until it looks syrupy.  Pour over the chicken and serve immediately.